t-Test for Independent Groups in Excel

Given a computed value of t, you can look up the critical value of t in a table, or you can get a computer to compute a probability.  Just as the computer can compute a value of p given t, it can compute a value of t given p.  To those of us used to calculating t and then looking up a critical value to compare it with to determine its probability, this inverse way of doing things seems counterintuitive.  Strange though it may seem, this is how you must approach the computation of a t-statistic in Excel.

The first step is to place your data into columns.  In the language of traditional experimental research, X1 is the experiential group scores, and X2 is the control group scores.  The next step is to compute the probability associated with the t statistic using the TTEST function.  Examine the dialog box for this function below: 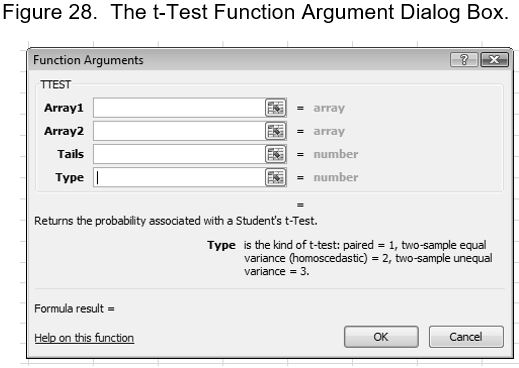 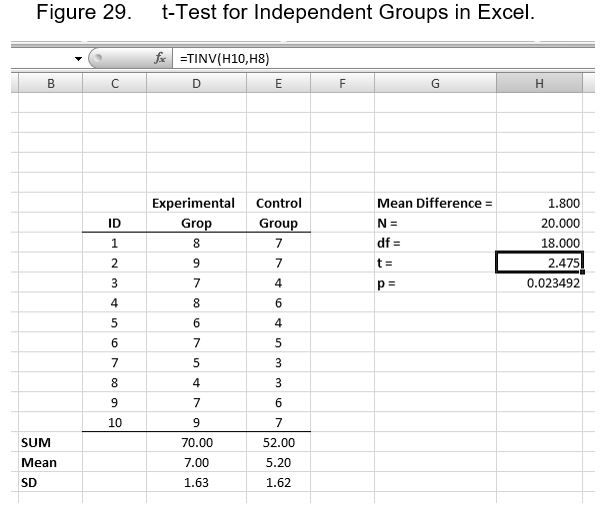 Note that the mean difference was computed by simply placing a subtraction problem in the function box for the cell (70.00 – 52.00).  For the Independent t-test, the degrees of freedom is equal to the number of subjects in both groups minus two (N -2).

When you have a large set of data and do not want to take the time to count the value of N, Excel can do it for you using the COUNT function.  Simply insert the COUNT function into an empty cell, and highlight the range of cells that you wish to count.  If you have data that you want to be counted in multiple columns, then enter them into different “value” boxes in the Function Argument box.